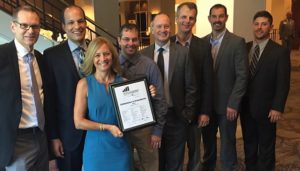 For the second consecutive year, EGStoltzfus was named one of the region’s fastest growing companies.

The Top 50 Fastest Growing Companies program, sponsored by the Central Penn Business Journal, identifies the region’s most dynamic companies that have made significant contributions to the strength of our local economy.

Central Penn revealed this year’s rankings at an awards ceremony on September 25th at the Harrisburg Hilton. EGStoltzfus received the #15 ranking. This is the second time EGStoltzfus has received Top 50 honors.

EGStoltzfus would once again like to thank Trout, Ebersole & Groff for the nomination!