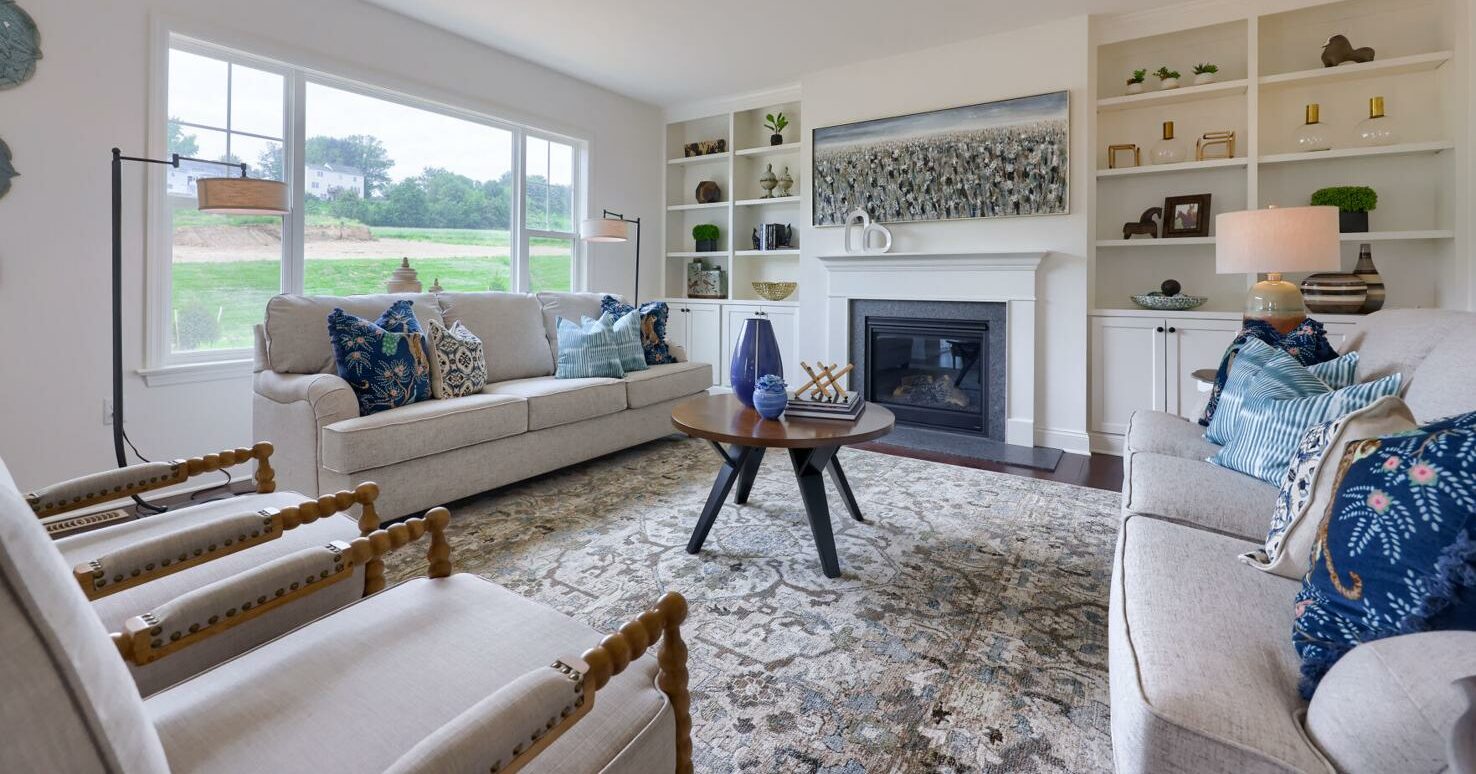 The following article was published in LancasterOnline on 9/11/22:

Editor’s Note: Ever scroll through builder websites and wonder why someone put what they put on the walls and shelves of their model homes? We do. So we’re starting an occasional series in which we ask an expert to dissect something we see, looking for lessons we might apply to our own homes. Today we visit the family room at 358 Autumn Harvest Lane in Lititz – a model home by EGStoltzfus Homes.

If you walk into this single-family dwelling, you’ll find more traditional elements than if you visit the model carriage house in the same neighborhood.

“You would think that the type of buyers looking for contemporary homes would be the newer buyers entering the market,” says Stephanie Lachance, EGStoltzfus design studio consultant. “But actually, we’re seeing more of the buyers who are downsizing looking to do something different than the type of home they’ve been living in.”

That’s why this model single-family home in Warwick Crossing has things like raised cabinetry and glossy floors with pronounced graining.

“We styled the home itself … to be more traditional,” Lachance says. “But then our staging company pulled in a lot of other accents that really makes the space feel transitional.”

The idea there is to broaden appeal.

“The lamps with the kind of drum shape … (along with the table and vases) bring in round elements to contrast the symmetry of the built-in-features of the room,” Lachance says. “We’ve also done the picture window. By bringing in that natural light we’re really brightening up the space.”

Incorporating layers of light at different heights is a must, she says.

“You can have the best room: expertly designed, beautiful colors, great selections,” she says. “But once nighttime comes, if your space is not well lit, it is not going to be as inviting or feel as homey as it could.”

From pillows to paintings, blue tones were picked for their calming powers.

“When folks walk in the model home we want them to feel comfortable and calm and think, ‘I want to hang out here awhile,’ ” Lachance says. “The more time they spend in our model homes, the more likely they are to buy.”

Two things to note about that painting above the fireplace:

1. It’s not a TV. “Obviously it’s our model home, so we’re not staging a television,” Lachance says. But she adds that in the last year or so, she’s seen a trend away from people putting TVs above the fireplace in homes they actually live in. “I’ve heard from some folks who have had it that way for a few years that straining their necks to look up isn’t necessarily the ideal position to be in,” she says.

2. Its size. “This is new for us to have such large artwork above the mantel,” she says. Now EGStoltzfus has this and a similar scenario in another model home elsewhere. “Someone in our company actually made a comment that the painting is so large,” she says. “And we were like, ‘Yeah. We know. It’s beautiful.’ It really grounds the room. And in this particular room, because of how wide it is, it makes the space feel wider visually.”

Hearth of the Home

The hearth on this gas-powered fireplace is a steel gray, leather finish. “So it’s more of a matte finish that has texture. And we’ve paired that with the high gloss floor in this room to provide some contrast (rather than) glossy hearth on a glossy floor,” Lachance says. “We are seeing a trend toward more matte finished floors. But this model home leans into a more traditional style.”

“The decor in the bookcases and on the mantel is very minimal,” she says. “That’s in our favor here because, again, it makes the space feel larger.” Granted nobody is living there, so there aren’t personal items and photos, she says. But take note of the openings the eye is drawn to, she suggests.

“There’s a trend away from things like having words everywhere. … You know, the ‘Live, Laugh, Love,’ ” she says. “Now it’s about embracing the open space rather than viewing it as a void that needs to be filled.”

The front legs of the couch are on the area rug and the rear legs are just off it. “And the same goes for the two chairs,” she says. “And that’s kind of how you want to space plan the size of your area rug.”

Most folks will probably need a larger one than they might first think, she says.

“A lot of people don’t understand that the rug should be sitting further under the couch,” she says. “I definitely made that mistake the first years in my house. Then I learned. Just from experience and reading and listening to different things — and obviously now seeing it in our model homes.”

Save $10K at Meadows at Strasburg!